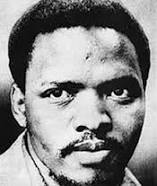 Long standing aficionados of the Black Consciousness Movement in the Free State came together yesterday to mark the 36th anniversary of the death of the iconic Steve Biko at Pax Nova.

Ntate Kgang Motheane, the prolific author briefly went down memory lane on the life and times of Biko - “a most assiduous, vibrant, visionary young man” - and he explained that his legacy is still very much intact. His words were echoed by Mpikeleni Duma who gave some anecdotes of the struggle in which he (Duma) was an active participant for decades too.

Indeed, 36 years ago Bantu Steve Biko who died whilst in the erstwhile apartheid police custody was remembered throughout South Africa, Africa and the world at large. Biko died in excruciating fashion after being tortured and driven for almost 1 200 kilometres in the back of a police vehicle from Port Elizabeth to Pretoria Maximum Prison.

Meanwhile, in memoriam of Biko, The Azanian People's Organisation (Azapo) members are re-rebuilding the home of an elderly woman in Port Elizabeth's New Brighton township.

Seventy-two year old Regina Ngalo's home was almost burnt to the ground two months ago. She has been living with relatives since the unfortunate incident.

Azapo's efforts to refurbish her home are part of week-long efforts to honour Biko's life. Azapo Provincial chairperson of the organisation, Lungile Dick has called on the business sector to assist: "As I'm talking to you now, people are working, some are inside some outside. We also want to appeal to business people out there to contribute to the well being of the old lady, be it in time or money or material there are no doors, or door frames, there are no windows there's nothing here. More than anything we are saying that it's what Biko would do, Biko was a committed person, a person who believed that our people are important and they come first, that's what we doing."

In October, the Steve Biko Foundation's annual University of Cape Town-hosted Steve Biko Memorial Lecture will take place. This year, Chair of the African Union Commission Dr Nkosazana Dlamini-Zuma - in this 50th anniversary year of the formation of the Organization of African Unity - will be delivering this lecture.

Bennet Mkhehlane, the motivational speaker and adroit entrepreneur has released his latest book: Live your life as a champion.

This excellent work is a must-read for those who aspire to better themselves in life, continue to grow by leaps and bounds and grasp solid success for themselves. It is an articulate, well researched, and pragmatic work; the product of a brilliant, highly intelligent mind.

The author explains to us that everybody can be a millionaire if they really want to be.  He gives examples drawn from around the world but we should live according to the will of God. Clever planning and knowledge of economics and finance is also important. Practical ways of educating ourselves are also pointed out with a perspicacious employment of our lives.

According to Mkhehlane:  “We must try to be positive; after all negative approach will cross business partners. Feel happy, organised and full of possibilities”.
Going further he also points out that talent is not enough, hard work must complement this. We must also know our marketing e.g. passiving, marketing and acting perspectives. Emphasis must be on leadership traits and skill.

In network marketing, plan is strongly suggested that is, your personal strategy to grow your business. “If you want to succeed your marketing network you must have a genuine plan.”

We are told that the secret is to have a winner’s mindset. “Most people expect success. What they fail to realize is that success goes to those who make it happen”.

This is a most brilliant work that can profoundly change lives of people out there. The author, Mkhehlane has added cubits to his reputation by writing such a laudable book.

VICTIMISED FOR BLOWING THE WHISTLE ON RACISM!

After blowing the whistle on racist attitudes meted out to black children at Wilgehof Primary School, Mr Craig Thiem’s life has allegedly become a living hell!

His agony started immediately after media exposure revealed how black children are being abused and called “kaffirs” by teachers in the pertinent school. These racist utterances, he reported was told to him by his children from that particular school. This has now become a worldwide issue.

Now stories have surfaced that the hapless Thiem was fired from his previous work and also from his Church! Additionally, his landlord reportedly doubled his bills – as regards his tenancy. Recently he was allegedly arrested again for stealing groceries worth R140 from one of the biggest supermarkets in FichardtPark in Bloemfontein. To add to his misery, he was refused employment by white companies.

“I failed to understand how Thiem could be charged for shop-lifting for R140 groceries whilst the same day I offered him R500,” said his new employer (exclusively known to Free State news)

The new employer (a popular taxi owner) told this newspaper that he employed Thiem after he (Thiem) begged him for a job since other companies refused him, and that he resorted to look for job from black employers. “I just offered him a job out of sympathy because I myself have been a victim of racism,” the new employer added.

When Free State news interviewed both the new employer and the beleaguered Thiem the latter confirmed that since his sensational disclosures on racism in Wilgehof school, his life has become a hell!